My Blog of Beekeeping Blunders

Origin of my beekeeping blog

We all make mistakes. And if you think you don’t, you’re a liar, ignorant, delusional or all three.

In fact, if we’re honest with ourselves, we make lots of them, especially when we’re new at something.

It’s not whether you’ll make a mistake; it’s when. You can let it disillusion you, or you can learn from it. I choose the latter.

That’s why I started my beekeeping blog – to log all my errors and mistakes and learn from them.

You might even say this Blog of Blunders is my gateway to success.

My blog is called The Hive Mind. I called it that because of the obvious connection between bees, hives and working together as a team, and also as a nod to Star Trek, since I’m a hardcore fan.

The address is beehivemind.com because hivemind was taken.

Why a beekeeping blog

Why did I decide to do a blog in the first place?

First, my initial reason was as a place to keep my hive inspection logbook. Paper gets lost, and I wanted a platform that I could access from anywhere.

Second, I like new stuff, electronic stuff, social media stuff, etc., and I like learning about them. So why not combine them. In addition, I really need to have more than a passing knowledge about social media as part of my day job, and the blog provided me a way to learn more.

Third, I’ve never been real disciplined when it comes to keeping a journal. I knew my intensions were good to keep regular beekeeping notes and blog them regularly. I also knew my track record didn’t necessarily indicate future success. Frankly, I thought long periods of inactivity looked bad. Still do.

Fourth, even though I initially thought of this blog as a place to document my hive inspections, it turned out I was more interested in learning new things. I wanted to talk about that, too.

Yesterday also marks the first day I attached my name to my blog. Before, I was always simply “beehivemind.”

Why the change? Mostly because I’m going to a WordPress conference at the end of the October. I also signed up for an online blogging fundamentals workshop from WordPress’ Blogging University, both of which required a name.

As indicated, my blog soon became an eclectic mix of beekeeping subjects ranging from how my hives were doing on a particular inspection, to a book review, to how I dealt with finding out I was deathly allergic to bees.

My posts have been pretty varied.

They’ve also been pretty infrequent. The main reason is that I write for a living. By the time I get home, I’m all written out, and there are plenty of things I need to be doing around the house.

Subject and audience for future posts

I’d like to continue presenting a mix of materials that interest me as a relatively new beekeeper. The more I know, the more I have to learn. I suppose many other beekeepers – novice and experienced alike – are the same.

In addition to myself, this blog is for them.

Beekeeping is as much art as it is science. As such, there are multiple opinions on how to do any one thing, depending on who you ask. Personally, I like seeing different opinions and learning enough about them to pick the one I think will be most effective for my situation.

In return, I want to connect with other beekeepers to learn from their inevitable mistakes. If they’re anything like me, I’ll be learning LOTS from them.

Bee stings are part of the job 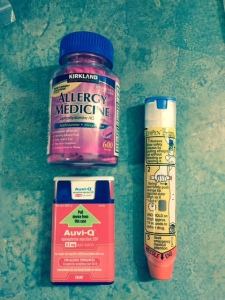 A week ago, I started bee-sting allergy immunotherapy. It’s supposed to help desensitize me to bee stings.

Last July, I learned the difference between a bee-sting sensitivity and a bee-sting allergy – the hard way.

With a sensitivity, the area around the sting can swell up, turn red, hurt, itch, and it can be mild or quite bad.

With an allergy, body systems start shutting down. That too can be mild or it can kill you.

I’ve always been sensitive to bee stings. The only thing I didn’t like about summer was going barefoot and stepping on a bee. Oftentimes I’d swell up to my knee.

I’ve been stung several times since I started beekeeping in the spring of 2013. They weren’t pleasant, but nothing I didn’t expect. I’d have some itching, redness and the swelling would take several days to subside. I’d also rub them with lavender and chamomile oil to help reduce the symptoms.

Only one of those times was I wearing my suit.

July 12, 2014, was a warm day, and I was going to put out some sugar-water out for the bees. My only task would be to open the outer cover, lay a Ziploc bag down on the inner cover, slice holes in it and replace the outer cover.

Usually, when I got stung, I’d pull out a credit card and scrape away the stinger and get back to work.

This time, I opened the outer cover and a bee flew out, like a guided missile, and stung me on the eyebrow.

This time, I felt like I’d been struck by lightning.

The credit card didn’t work because of the hair in my eyebrow. Fortunately, my son was there to pull out the stinger.

I went into the house to take a couple of Benadryl and rub on some lavender and chamomile oil. I went back to the garage and figured I’d put on my suit and finish my work. By that time I was feeling very warm, especially in the face.

I sat down on the stool to rest for a minute and my son asked me if everything was ok. I said, “Yes.” 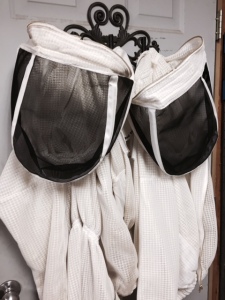 My new Ultra Breeze bee suit is thicker than my original cotton suit.

I put my legs in my pants and had to sit down again, this time with my head between my legs. I was feeling dizzy, my face was flushed and very warm. My son said, “You don’t look well. Are you sure you’re ok?”

He’s a drug counselor. When I told him I was ok and just needed to rest a bit, he said, “If you were a patient and you came in looking like that, I’d make you see a doctor before you left. So cut the bullshit and tell me what’s going on.”

At that point, I decided it was time to go to the hospital. By the time I got there, I was having trouble breathing and swallowing. I had a tightness in my throat, which would ease when I swallowed, but when I swallowed, I would become slightly more nauseous.

They hooked me up to IVs and did an EKG to make sure I wasn’t having a heart attack. The doctor said one of the medications I was on could interact with epinephrine, but they didn’t have much of a choice. So they brought in the crash cart. That was ominous.

When they started adding stuff to the IV, my blood pressure went up and my pulse dropped. The automated blood pressure monitor apparently couldn’t tell I had a pulse and kept squeezing harder to the point I thought it was going to pinch off my arm. 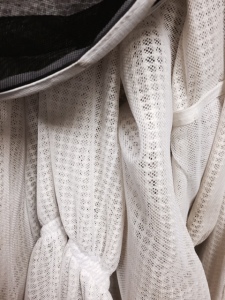 This suit is much cooler, especially when there’s even a slight breeze. It’s also thicker, providing better sting protection.

They finally started reading my blood pressure the old-fashioned way. My pulse got down to about 35 beats per minute before heading back up.

I was pretty depressed laying there thinking I was going to have to give up beekeeping. It didn’t take me long to come around to the fact that I didn’t have to.

Why should I give up something I love because there’s a little risk involved? Everything has risks. You can die from water, electricity, radiation, driving to work – if you’re not careful and are not wearing proper PPE or personal protective equipment.

Now, before working with my bees, I take a Benadryl, wear my suit, have a phone and EpiPen in my pocket, have somebody else standing by and have a plan for what I’m going to do.

Since this is getting lengthy, I’ll talk about “The Plan” in a future post.